The Dangers Of Over-Exercising 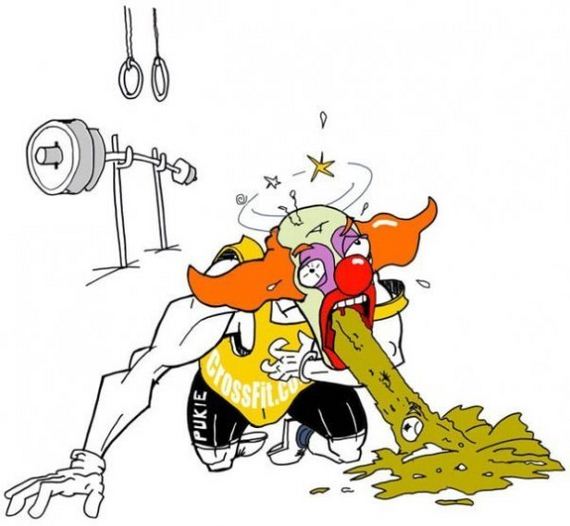 Too Much Of A Good Thing?
Exercise can be compared to a remedy. The remedy is very effective for weight management and overall health, and it also keeps the body from injuring itself during everyday, light activities. However too much of any remedy can turn into a bad thing.

Trainers only recommend intense exercise sessions in small doses because over-exercising can damage our bodies both chemically and physically. Remember, exercise is a reward! It shouldn’t be a compensation for poor eating habits.
Health experts warn that too many people believe that they can eat whatever they want because they can just exercise harder and longer to make up for it. Over-exercising has a number of detrimental effects on our bodies, many of which people are unaware of.

Delayed Onset Muscle Soreness
One of the many side effects of over-exercising is that it affects muscle tissue. Exercising too much can impair the ability of muscles to naturally and quickly heal themselves after a workout.
This is because the immune system does not have enough time to repair even the slightest injuries that would normally occur from safe exercise. If you’re constantly exercising, then your body does not have ‘down time’ it needs to heal. This can lead to more serious problems, such as Delayed Onset Muscle Soreness (DOMS). The American Academy of Orthopaedic Surgeons warn that prolonged over-exercising can have severe effects on the health of your muscles. 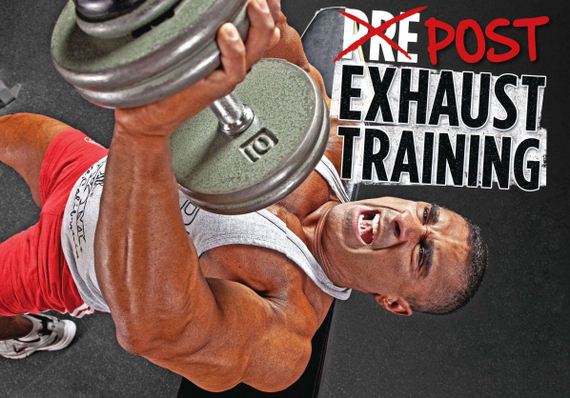 Chemical Reaction
Over-exercising can also harm the human body chemically. This is because you can only workout at an intense level for so long. Plateaus are soon reached, and then a noticeable decrease in fitness will become evident.
You may even notice your body cannot adapt to your usual exercise program. This is because the muscles have become tired and weak from being overused. Muscles will no longer function properly because they have not been able to heal to their optimal state. Signals from the nervous system are impaired and they soon begin to feel sluggish. This can lead to an increased risk of more serious injuries. 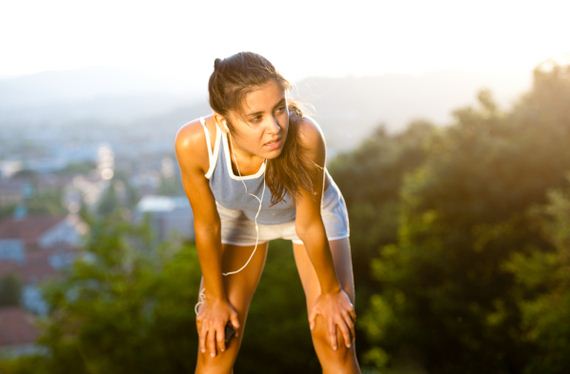 Quick Fix?
The good news is that over-exercising is not difficult to fix. If you have noticed signs of wear and tear on your body from exerting yourself too much then take it easy when you exercise!
Remember that the amount of exercise should relate to the actual difficulty of the exercise. For example, you should only do short bursts of intense exercise, compared to longer sessions of light to moderate exercise. Never exercise to the point of exhaustion, otherwise you are doing your body serious harm. Always ensure you are doing the exercises correctly to prevent unnecessary damage. It is also important to keep hydrated so your muscles can function properly during the workout. Last but not least, always ensure you are resting in between sets of exercises. 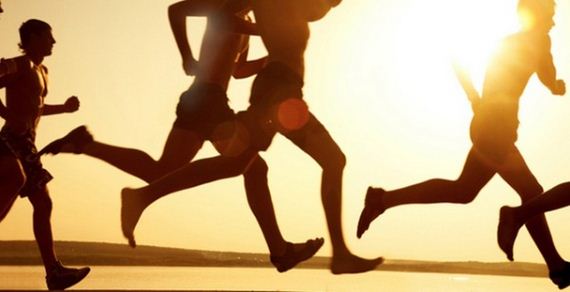 Deeper Problem?
But what if your habit of over-exercising is mental, rather than physical? Some people are actually addicted to over-exercising and find it a habit that they are struggling to overcome.
Firstly, get help from a personal trainer. Not only will they be able to recommend a good routine for you, but they will also stop you from overdoing it. Confront your fears – what is it that you have to lose from limiting your exercise to the recommended weekly amount? You should consult a counsellor if you feel obsessively compelled to exercise. Some people use exercise to control their anxiety. Try slowing down your exercise regime to include other stress-reducing activities such as yoga. Lastly, you can also join a body image group if you feel as though your over-exercising is due to negative body image beliefs. 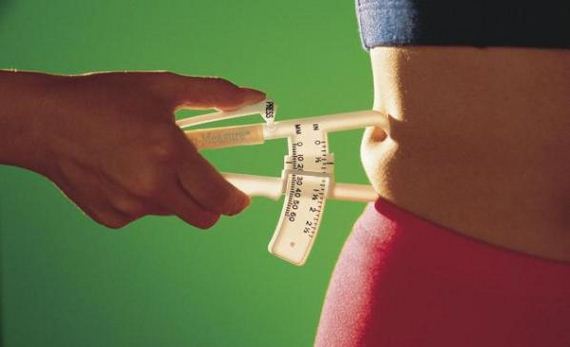 The Irony Of Over-Exercise
It sounds ironic, but exercising too much can actually decrease your performance. So while you may think that over-exerting yourself will make you stronger, better and faster, think again!
Your body will no longer be able to handle even your normal exercise regime. Suddenly, you’ll feel as though you are going backwards. This is due to a number of reasons involving the vital organs in your body. Your heart will not be able to provide adequate and effective blood circulation to your body. Secondly, your lungs will not be able to exchange oxygen as effectively, therefore making you out of breathe and unable to exercise at all. Think that’s bad enough? Trust us, it gets worse… 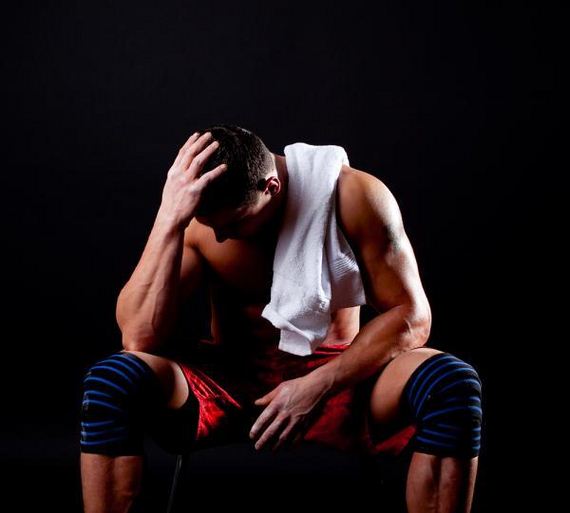 Over-Exercising & Daily Life
Over-exercising also presents more subtle risks and side-effects that will disrupt your daily schedule. If you are exercising too much, then the risks of feeling moody, tired, irritable and unable to concentrate will be dramatically increased.
So although it is commonly believed that exercising is good for you, it is important to realize that over-exercising is the complete opposite. Your normal sleep patterns may also be disturbed. All of a sudden you will find it difficult to get to sleep, or perhaps you continuously toss and turn during the night. The worst part though? Over-exercising leads to an increased occurrence of illness and a decreased rate of healing. Immune functions, such as neutrophils, lymphocytes and mitogen responses also become impaired. 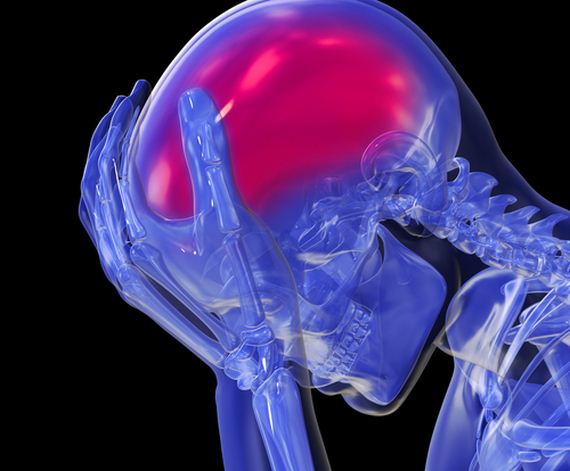 Not So Funny Bones
By now, you’ve probably realized that exercising too much is very harmful to your body, but guess what? There’s more risks! Over-exercising can cause problems that will affect how you walk later on life, especially as you may develop stress fractures in your bones.
Some people who were once addicted to extreme exercising have actually had to have joint replacement surgery. This surgery is increasingly being performed on people at a younger age, due to the wear and tear of over-exercising on their bones, joints and muscle. Women also face dangerous and permanent risks if they over-exercise and limit their calorie intake. One such risk is osteoporosis, a condition that will make their bones brittle and break down with age. It doesn’t sound pretty, does it? 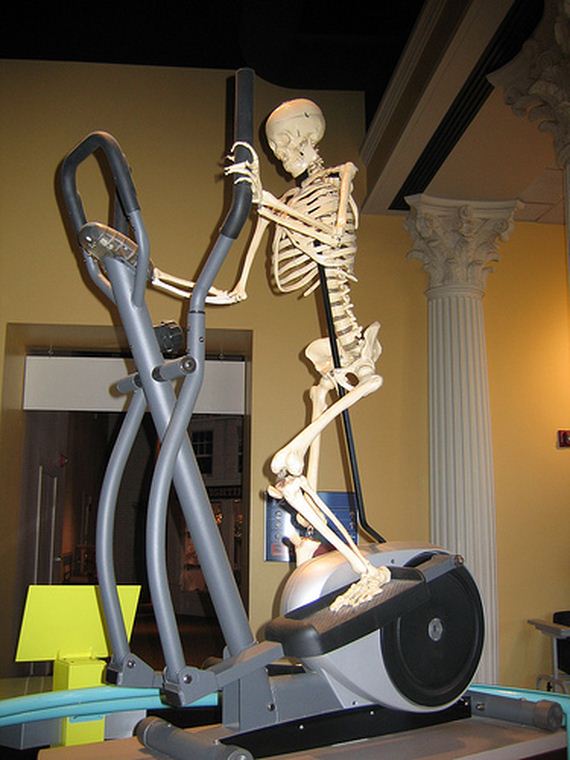 Exercise Addiction
Did you know that you can actually become addicted to over-exercising? There are multiple reasons why. For example, exercise is known to release endorphins, and it is this chemical that also gives people a sense of euphoria, or intense happiness.
Exercising also lessens anxiety, and therefore people struggling to overcome their emotional issues may tend to over-exercise, believing it to be the cure of their woes. Others also enjoy the feeling of being in control of their own body, and exercise makes them feel powerful. Too much power is never a good thing though, and as a result, they become addicted to that feeling. Another reason some people become addicted to exercising is because of body image issues. Today’s society places extreme importance on looking good, therefore influencing people to take their physical fitness to extremes. 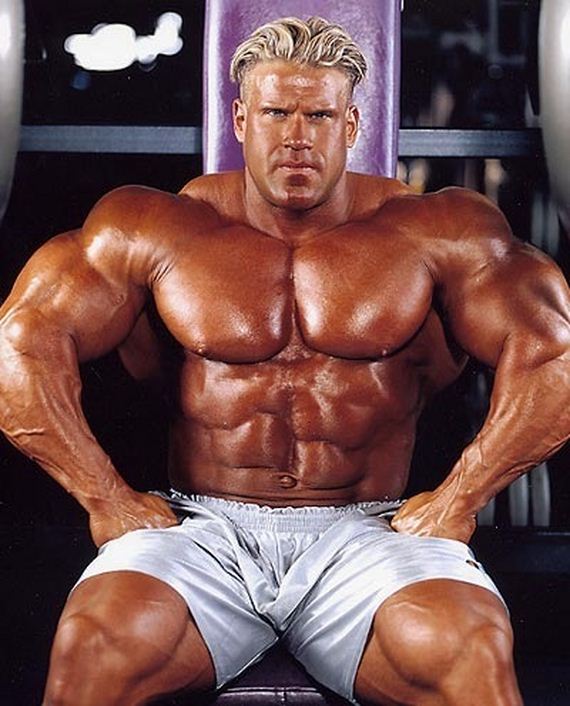 Feeling Dehydrated?
One of the most common risks of over-exercising is dehydration and electrolyte imbalance. The scary thing is that these two risks can happen well before you even realize it!
Dehydration can actually cause some very serious side effects, all of which will cause you to either make a visit to your doctor or local ER. These symptoms include heart palpitations, cramping, nausea, dysphoria, passing out and vomiting. Our bodies need sufficient hydration in order to function properly. However, even if you feel as though you are keeping hydrated, extreme exercise will deplete your hydration levels quicker than you realize. In order to lessen the risk of suffering from dehydration or electrolyte imbalance, you need to drink plenty of water while exercising and remember not to overdo it! 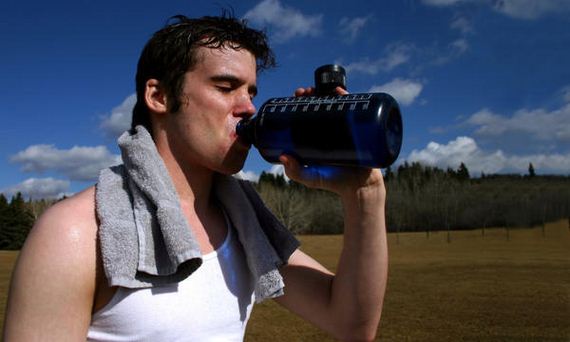 Muscle To Burn
Did you know that another risk of over-exercising is the fact that your body begins to burn muscle? So although many choose to workout in order to build their muscle tissue, they could actually be doing more damage.
The reason for this is simple: our bodies only have limited choices when it comes to burning fuel. When we exert ourselves physically, our bodies burn the readily available glycogen first. As soon as the glycogen has been completely burnt, our body turns to our fat cells. This is the optimal result of exercise – for our bodies to burn fat cells, however what happens when we go too far? Over-exercising causes the body to then look to our muscle mass as a source of fuel. This is detrimental as it causes the muscles to be eaten away at, causing weakened muscles. 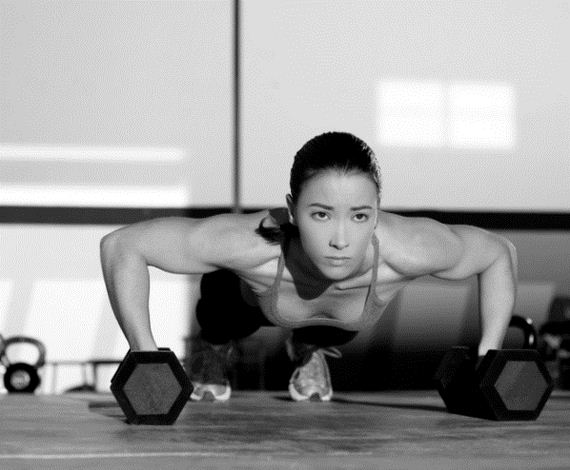 From Addiction To Fear
Another common risk of over-exercising is the fact that you will feel burnt out. While this one sounds obvious, it can actually lead to long-term issues. People who workout for too long and too hard often find themselves sick of it.
What began as a healthy habit has turned into something that has made the person hate, or even fear exercise. Why is this? Because the person now associates working out with miserable, painful torture, however it isn’t meant to be this way! If someone doesn’t feel like exercising one day, then they should take the day off. Give yourself permission to relax, and promise yourself that you will do some moderate exercise the next day when you feel up to it if this happens to you.
Keep a moderate intensity in your workout sessions and always add variety to stop you from getting bored. It is only when you push yourself well and truly past your safe limits that exercising becomes a terrible experience. 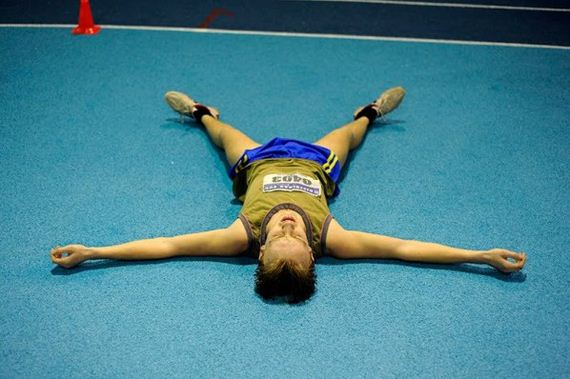 Rhabdo The Clown
So what is the worst possible outcome of over-exercising? We hate to scare you, butthe truth is – death. Many overly-keen workout enthusiasts have pushed themselves past their limits and have ended up in hospital being treated for a condition known as Rhabdomyolysis, or Rhabdo the Clown.
Rhabdomyolysis is the breakdown of muscle fibers that leads to the release of muscle fiber contents (myoglobin) into the bloodstream. Myoglobin is harmful to the kidney and often causes kidney damage. Symptoms of this condition include: dark, red, or cola-colored urine, weakness, muscle stiffness and aching, and decreased urine production. The patient can be treated by quickly flushing myoglobin out of the kidneys using fluids containing bicarbonate. Some patients, however, need kidney dialysis. While many who suffer from Rhabdomyolysis can be cured and back on their feet within weeks, some who leave their symptoms for too long may not be so lucky. 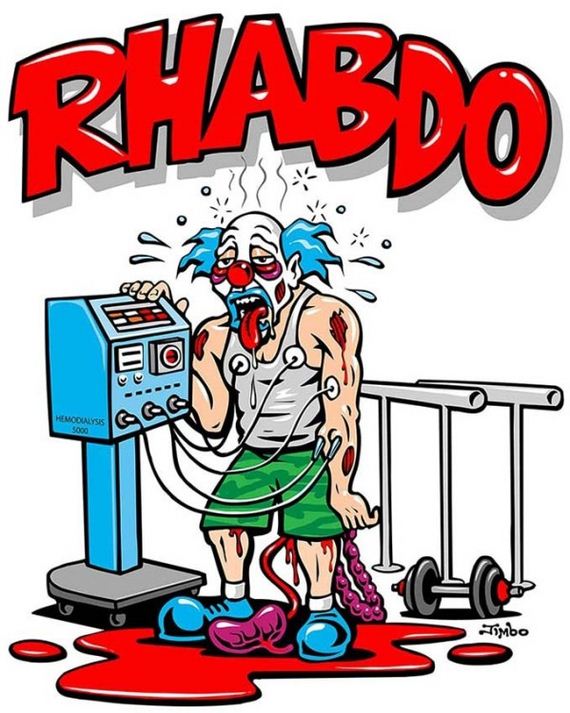 Even Athletes Can Suffer
The truth is that rhabdomyolysis from over-exercising can happen to anyone, not just those who are unfit. In January of 2011, 13 Iowa football players were sent to the emergency room with rhabdomyolysis after the first intense workout of the year. In 2008, seven swimmers at South Carolina were also hospitalized with the condition.
Even professional and highly trained athletes can suffer from the condition if they overwork themselves to the point of exhaustion. It is believed that rhabdomyolysis occurs when a person hasn’t worked out for a period of time, but overdoes it as soon as they resume their first workout session. This is exactly what happened to the professional athletes mentioned earlier. Their muscles just weren’t ready for that kind of sudden and intense physical exercise. 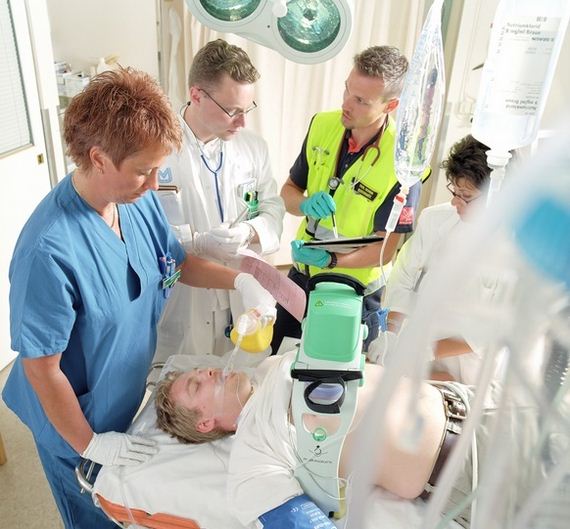 Warning Signs
Health author Andrew May discovered some shocking results after studying the habits of gym goers. He found that “23 percent of gym goers exercised between six and 20 hours a week and had become dependent on their physical fix.”
So what is considered ‘excessive exercise’? Health professionals warn that exercising more than 90 minutes per session and more than three times a week borders on excessive. One of the easiest ways to determine if you are over-exercising is to familiarise yourself with the following warning signs. Do you suffer from extreme fatigue, sudden weight loss, or muscle injuries? Do you keep on training after suffering from an injury? If you miss an exercise session in a day, do you feel guilty about it? Other warning signs include headaches, insomnia, loss of appetite, muscle weakness and heart palpitations. 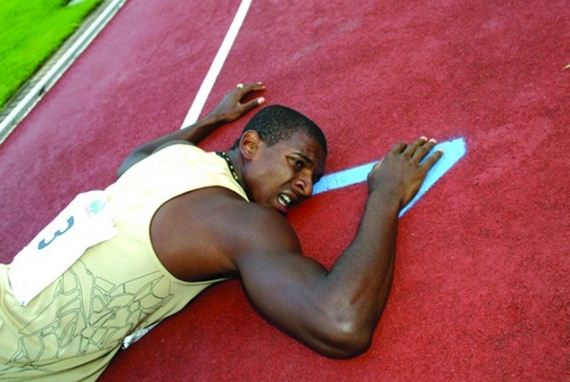