The “Moving Dunes” Is The Illusory Artwork Installed On A Street In Montreal, Canada 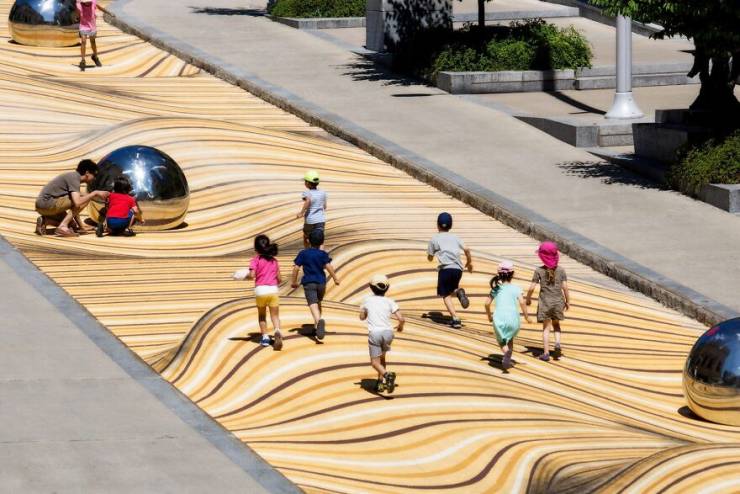 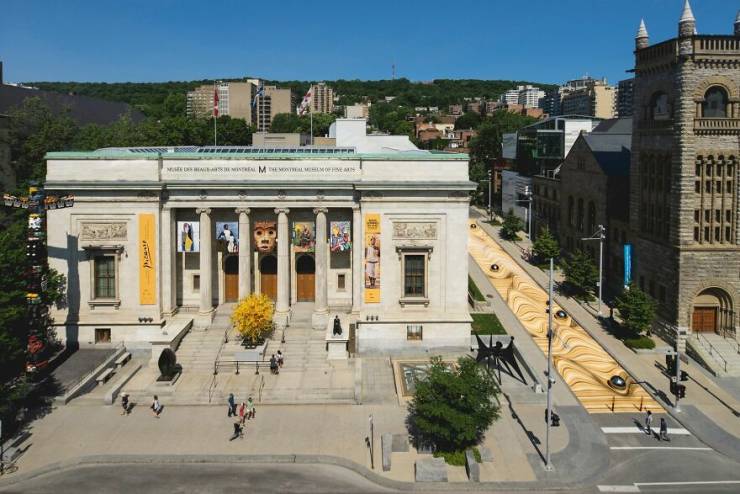 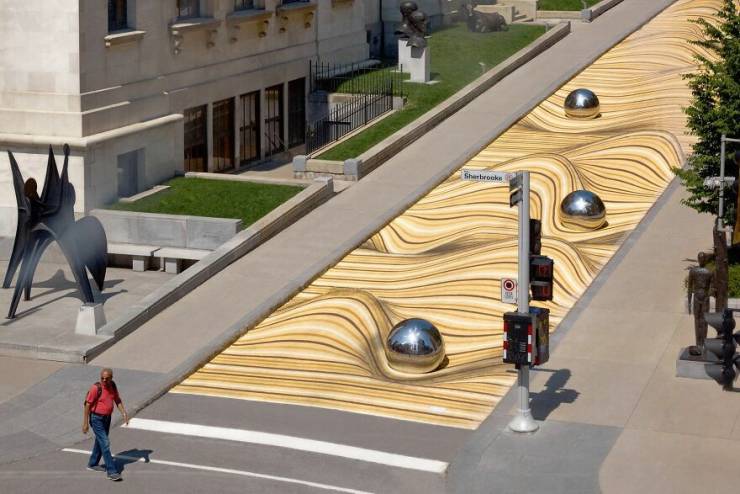 Charles Laurence Proulx, the architect behind the “Moving Dunes” and co-founder of NÓS, said that the idea came as the team had to create “a bi-dimensional installation to maintain vehicle access across the street, but we wanted to give the street a topography, a volume.” The team was inspired by “the graphic technique of cubism to create the illusion (trompe-l’oeil) of depth.” 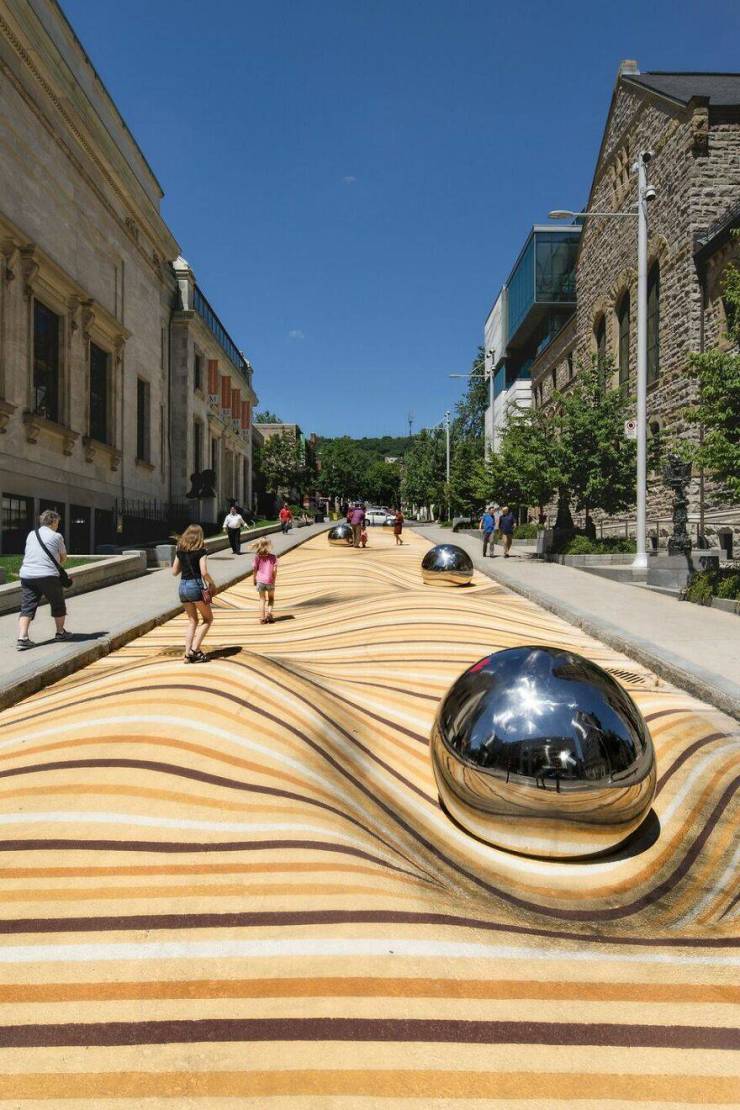 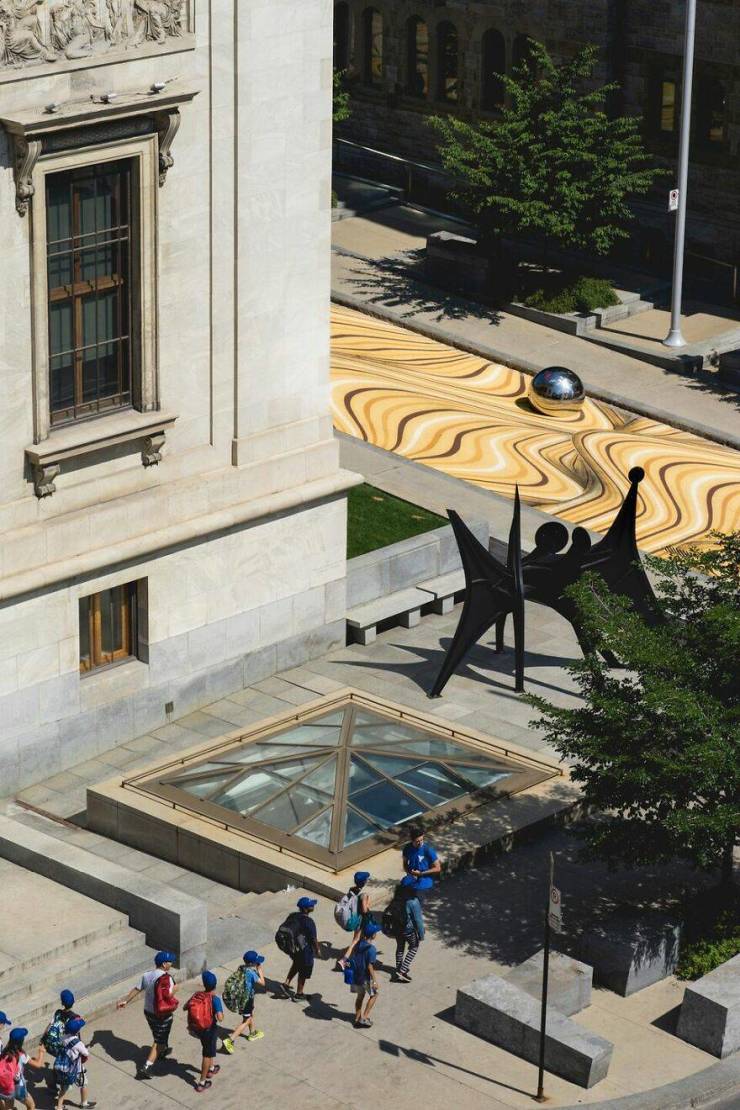 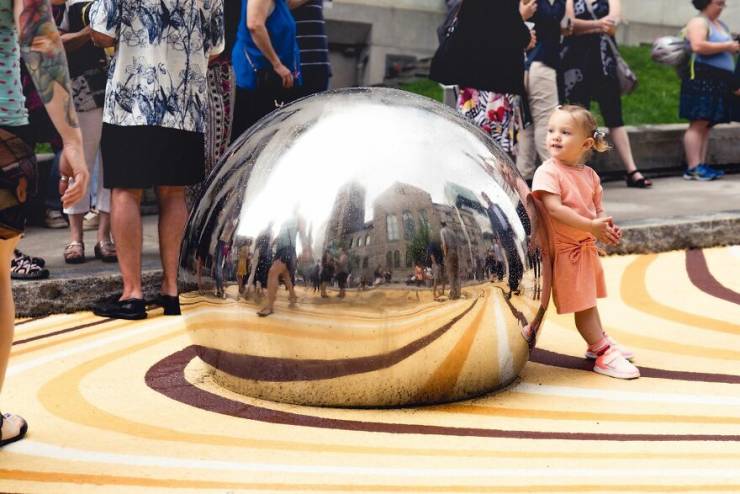 Charles also recounted the whole process from the concept to the final installment. “First, we did a 3D model of the topography and spheres with our architectural modeling tool and with a simple pattern applied to the topography. Then, we worked with the museum to choose a graphic pattern and colors to match the exhibition branding and identity.”

Finally, the team at NÓS did a real-scale productions drawing. “At last, we mapped the pattern on the the street as a giant stencil.” 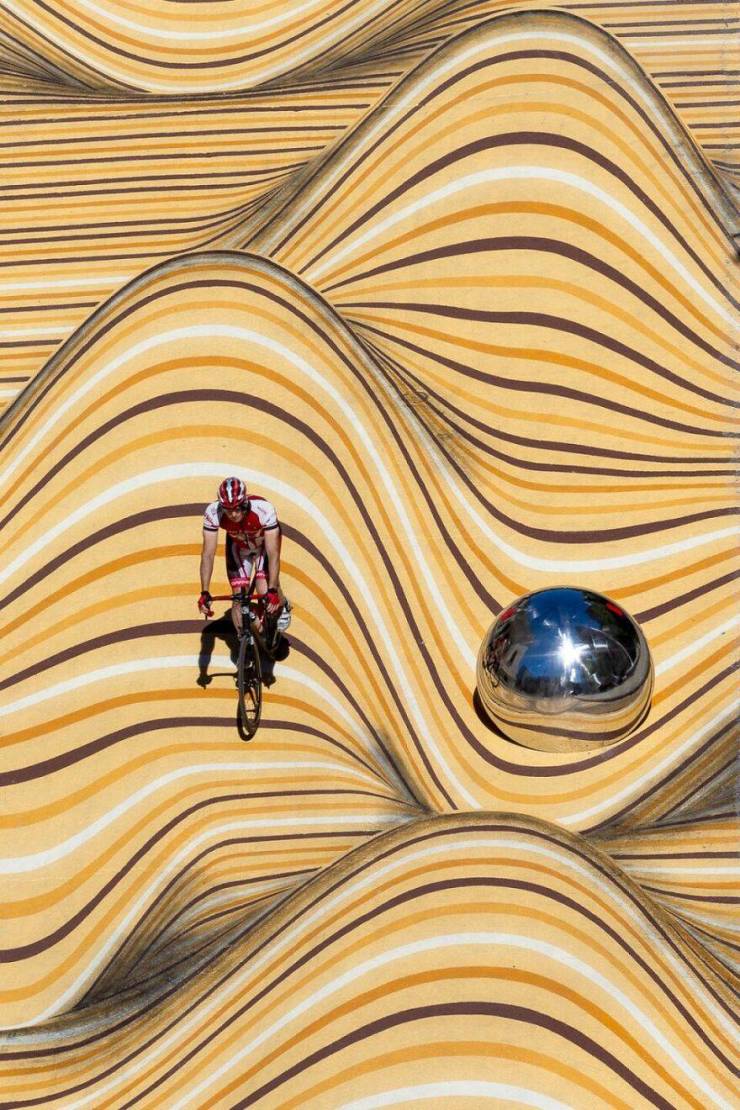 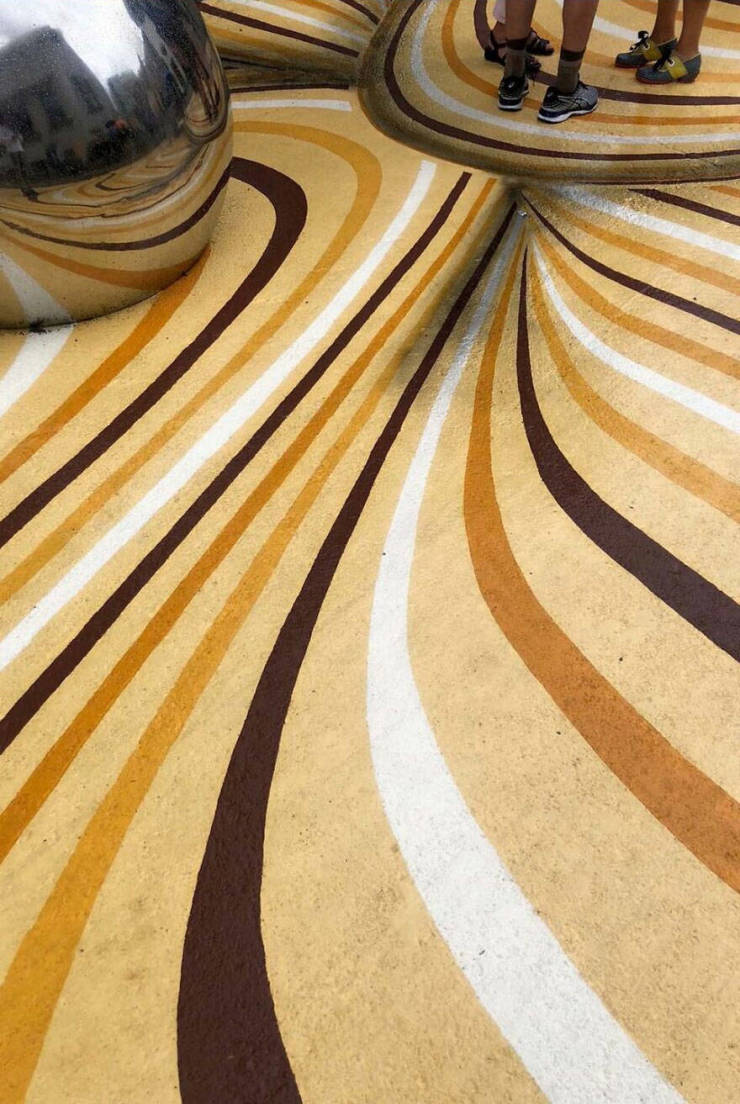 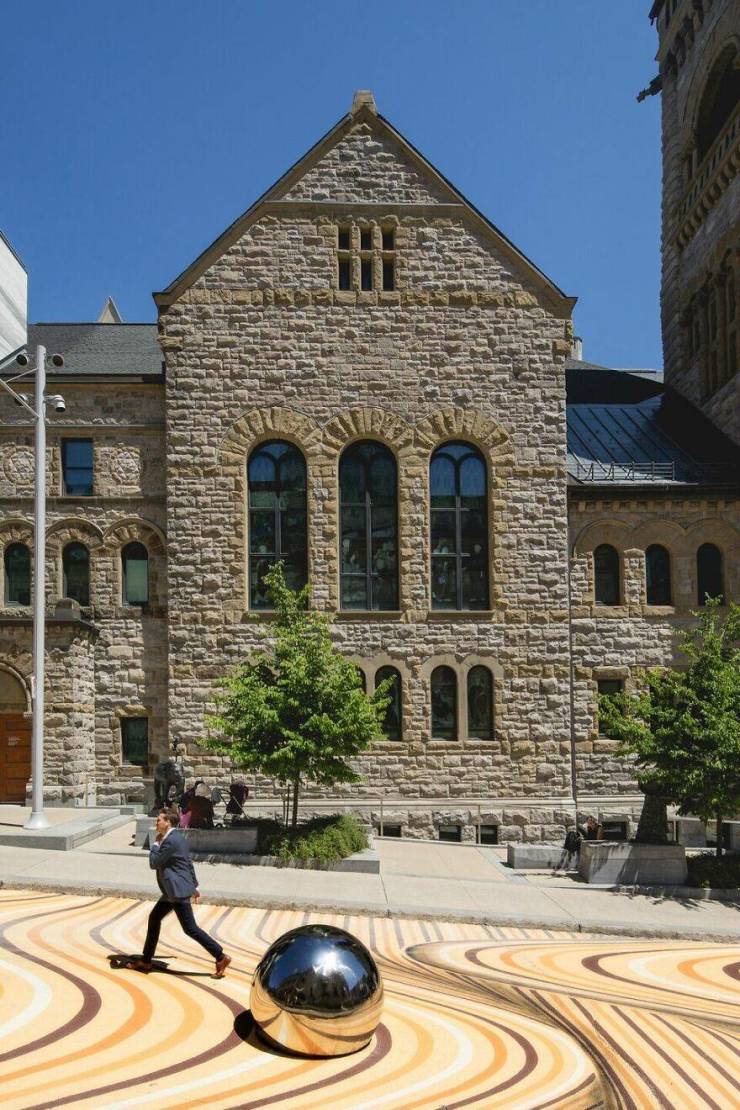 Charles said that the project came about as the Montreal Museum of Fine Arts proposed an artwork on this street, Avenue de Musée, which is right next to the museum. It was created as extension of the temporary exhibit “From Africa to the Americas: Face-to-face Picasso, Past and Present at the Montreal Museum of Fine Arts (MMFA).” Just like cubist painters, the artwork is built to question the role of perspective in visual representation.

One of the methods used to create the distorted sense in the piece is “anamorphosis.” The term refers to “the distortion of the subject reconfiguring itself according to the position of the body in space.” Moreover, “through this process, ‘Moving Dunes’ introduces the public to the essence of this approach in a playful way.”

As the viewer moves, the sand shapes are reversed, and the ground comes alive 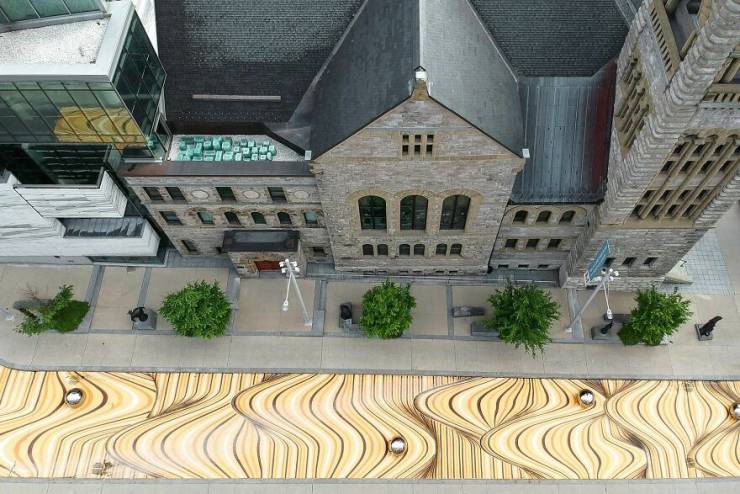 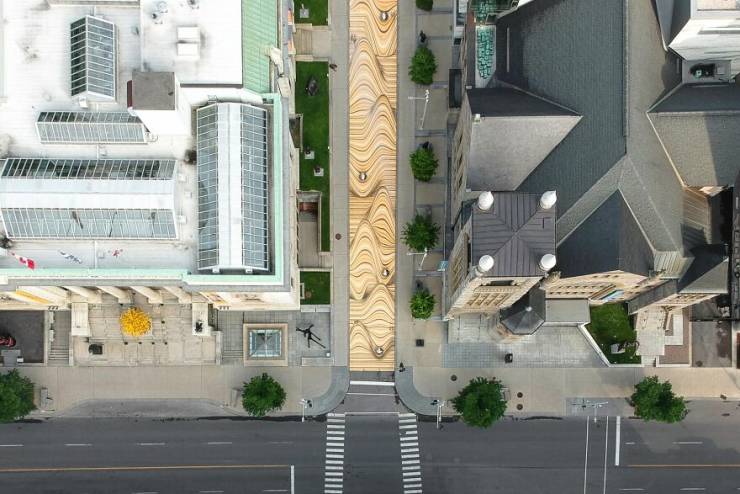 The optical piece was designed by a team of 4 artists working at NÓS, which is a Montreal-based company that brings together professional architects and artists attached to several disciplines and diverse cultures in order to share and innovate through common projects. The overall budget for the piece was $50,000, according to the statement.