This Guy Went Out In Search Of Fish, But Found A Bald Eagle Instead. Amazing! 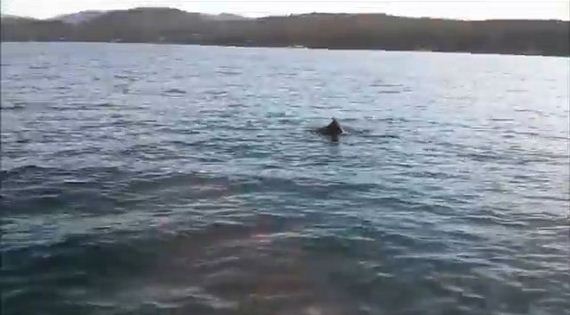 When Dan Dunbar took his boat out near Nanoose Bay in British Columbia, he was probably hoping for a very different catch of the day.

Instead of reeling in a fish or two, Dunbar looked out and noticed a bald eagle barely treading water. He wasn’t sure exactly how to help it, but while he considered his options he pulled out his camera and started rolling.

Eagles are usually excellent swimmers, but this little guy was clearly struggling.

The bird made its way closer to the boat, but drifted away before Dunbar could get near enough with his net.

So he turned the engine on to get as close as possible, finally nabbing the distressed fella.

The eagle rested in the net for a few minutes until he’d gathered enough strength to enter the boat.

Once inside, he stretched his wings out to help them dry.

After awhile, he decided to give them a shot at flying…but they weren’t quite dry enough.

He looks kind of embarrassed. “Well,” Dunbar narrates, “So much for that idea. Guess you better dry out a little more.”

You can watch the whole ordeal with Dunbar’s encouraging commentary here:

The poor bird was eventually picked up by Wildlife Rescue and taken to Orphaned Wildlife Rehabilitation Society (O.W.L.) where he has received treatment. Officials explain that though his wings weren’t injured, it’s likely that he ingested some other animal who had been exposed to rodenticide used by local farmers.
Previous Jenny McCarthy Nude Photo Leak
Next It’s Good To Be At The Top Of The Food Chain