This Man Lived Without Arms For 40 Years, And Now He Has New Ones 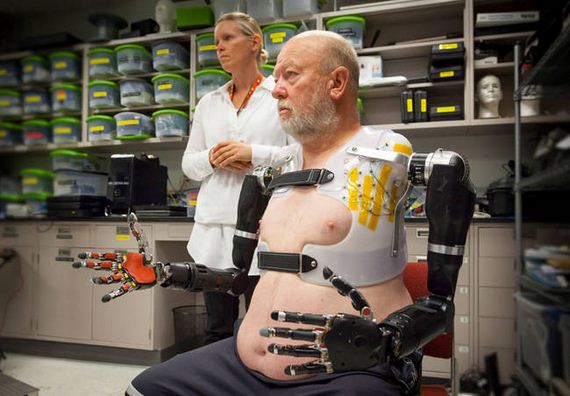 Forty years ago, Les Baugh of Colorado lost both his arms at the shoulder in an electrical accident. Now, he’s not only regained his arms, but also became the first person with this type of amputation to wear and control two modular prosthetic limbs.

These aren’t just any prosthetics; these arms are fully integrated into Baugh’s body. They’re hooked up to his nerves, meaning he can control and move them with thought alone. The scientists and researchers at Johns Hopkins University Applied Physics Laboratory (APL) are behind this medical breakthrough. 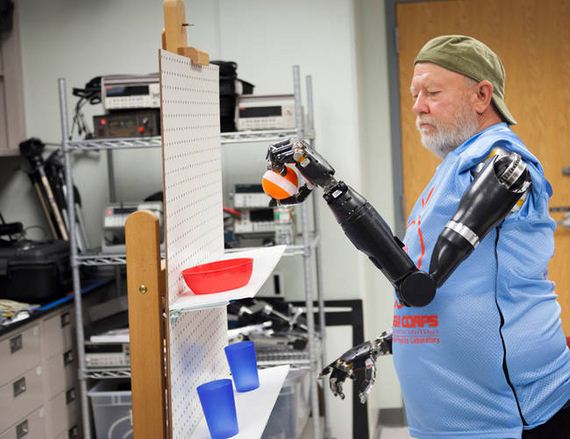 It sounds like magic, but Baugh had to undergo intensive training as well as a relatively new surgical procedure called muscle reinnervation. This process makes adjustments to one’s nervous system. In Baugh’s case, it meant reassigning the nerves in his chest that once controlled his arms and hands so they would allow Baugh control of the prosthetics. Trauma Surgeon Albert Chi, M.D. of Johns Hopkins explains that “by reassigning existing nerves, we can make it possible for people who have had upper-arm amputations to control their prosthetic devices by merely thinking about the action they want to perform.” 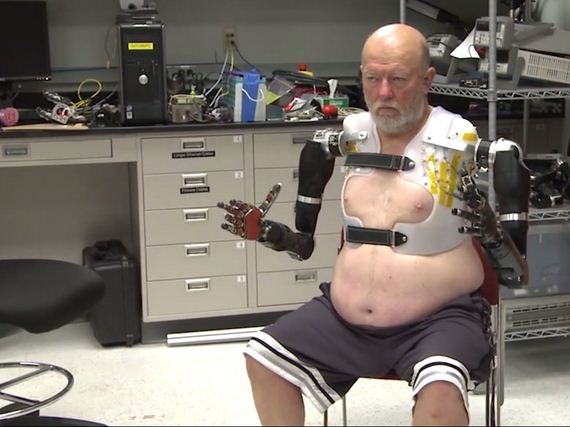 To get used to his new arms, Baugh underwent (and continues to undergo) a series of exercises.

After the surgery, which Baugh describes as very painful, he underwent vigorous training as well as fitting sessions for the prosthetics. The arms are connected to his body via a “socket,” a plastic harness that fits over his body like a vest. When outfitted, Baugh can control both arms in a full range of motion just by thinking about it. After 40 years without arms, Baugh describes the experience as being in a whole different world. 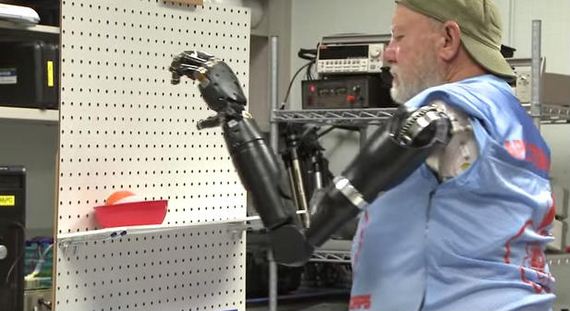 After a surgical procedure, the prosthetic arms are actually connected to Baugh’s nervous system, meaning he can move his arms by thought alone–just like any other limb.

The technology is still fairly new, and Baugh’s story marks a milestone in the advancement of prosthetics. While there’s still a lot to learn for both Baugh and the APL, the significance of the procedure’s success is astounding. People who have lost limbs through injury and illness, including combat veterans, can now have mobility available to them once again. 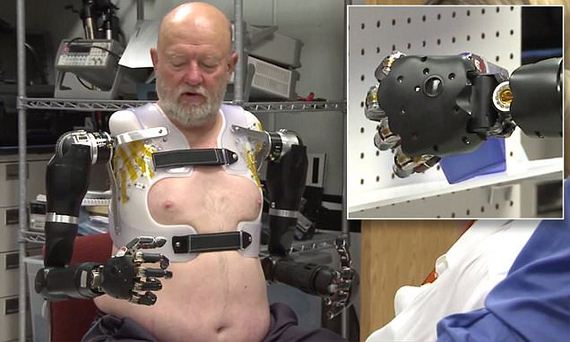 Even the APL team was amazed at what Baugh was able to accomplish with his prosthetics in a short amount of time. In only 10 days, Baugh was able to complete relatively complex motions that required up to eight separate movements. The tasks seem simple, like moving a cup from a shelf to a higher shelf, but that’s a huge feat for someone like Baugh, who is operating arms for the first time in four decades.

Courtney Moran, a prosthetist at APL who worked with Baugh, described how incredible the whole thing was. “We expected him to exceed performance compared to what he might achieve with conventional systems, but the speed with which he learned motions and the number of motions he was able to control in such a short period of time was far beyond expectation,” she said. “What really was amazing, and was another major milestone with MPL control, was his ability to control a combination of motions across both arms at the same time. This was a first for simultaneous bimanual control.”

For his part, Baugh is just happy to have arms again. The next step in his treatment is to take a set of arms home and learn to integrate them into his everyday life. He’s certainly looking forward to it.

“Maybe for once I’ll be able to put change in a pop machine and get the pop out of it,” Baugh says. “Simple things like that that most people never think of.”

Previous These Photos Of Everyday Life Are Hiding Something A Little Less Ordinary
Next Funny Pictures Vol.870