Even Our Balloon Animals Will Soon Be Made By Robots 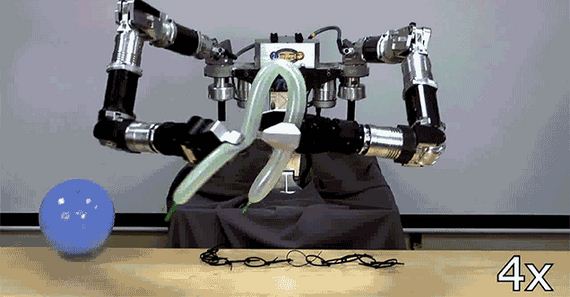 DARPA’s ATLAS is an impressive feat of robotics engineering, but despite representing the bleeding edge of automatons, it’s slow and clumsy when it comes to doing anything on its own.

A better way to make a robot as skilled as a human is to simply put a human in complete control of it, manipulating it remotely like a puppet from a safe distance. That’s what RE2 Robotics thinks is the best approach, and watching the robot arms it developed make a balloon animal is pretty convincing.

The Highly Dexterous Manipulation System — or HDMS for short — that RE2 developed has other advantages besides impressive dexterity. Were you to find yourself in a situation where a robot like ATLAS were to fall on you, it would not be a pleasant experience. But The HDMS is actually half the weight of most robotic torsos, while still doubling the strength of its human operator.

That’s why RE2 Robotics has designed the system for military and rescue work. It allows the robot to go into a dangerous situation, but actually be useful when it comes to disarming a bomb, or digging out a survivor, because there’s actually a human controlling its every move.
Previous Fascinating Photos Reveal How They Built The SR-71 Blackbird
Next The Japanese SDF Crafted This Massive Star Wars Snow Sculpture